When I saw Ulefone offering the T1 at a mere RM870 online, I instantly bought three. For such price and specifications, it is a no brainer purchase to me.

The phone as I mentioned in my first look of the phone, is powered by the MediaTek Helio P25 quad-core processor with 6GB of RAM, and 64GB of storage space, which could be expanded to 256GB at any time.

It comes with two Samsung dual lens cameras on the rear, and a 5.5-inch FHD screen which looks awesome.

There’s the model embossed at the back, but what made this phone’s rear spectacular to me, is the two lines that cut through the top and bottom of the rear.

At the front, there’s nothing much to say as there’s a physical ‘Home button’ at the bottom, with the front camera coming with a 13MP camera with soft light ability.

Looking closer, I found my self slightly disappointed with the lower button of he Ulefone T1 as the navigation buttons are within the screen, and not placed beside the home button like Samsung smartphones, or Xiaomi smartphones for that.

I felt there’s waste of space here, though you could hide the navigation bar if you wanted a bigger view.

Ulefone takes pride that their fingerprint scanner is the fastest, and they my be right because unlocking the T1 was a breeze and almost instant.  According to Ulefone, it takes 0.1 second, and I can testify to you that it was exactly that fast.

A tap on the fingerprint scanner would unlock the phone within a second,and it is by far the fastest unlocking via fingerprint I’ve used.

I personally prefer the fingerprint scanner on the sides, but putting it on the central/home button is also good.

I’m so used with Xiaomi’s MIUI interface and Android, that I personally feel that the pure Android on the Ulefone T1 is lacking.

For a 6GB RAM powers smartphone, some apps still lag, which I find surprising. I am not sure if it’s the phone, or the Android 7.0 that runs the phone, but there are moments when the phone freezes for no reason, though it does gets back to normal after a few seconds.

Most of the time however, operation of the Ulefone T1 is however smooth and snappy and the lag only appears once in like 20 times? I don’t know. I wasn’t counting.

Another interesting thing is that the phone doesn’t heat up when constantly used, and remains cool despite almost any operation.  I attribute this to the powerful Helio P25 processor, and the 6GB RAM.

This is a huge deal for me as some smartphones like the Xiaomi Mi4i which runs on the Snapdragon 615 processor heats up so bad, the phone always restarts. Such masive problem isn’t detected on the Ulefone T1.

Photos produced by the Ulefone T1 seem to be more vivid, and they seem to be sharper,if compared to what the Xiaomi Mi Note had to offer. Now, I am comparing the Ulefone T1 photo quality with my Xiaomi Mi Note because in my opinion, photos by the Mi Note are exceptional despite being a single lens, plus it is the only phone I have in my keeping as comparison.

Also, both phones are using a 13MP lens, though the Ulefone T1 does claim that it’s using Samsung lenses.

Below is the comparison of both the Ulefone T1 vs Xiaomi Mi Note when it comes to photo quality. 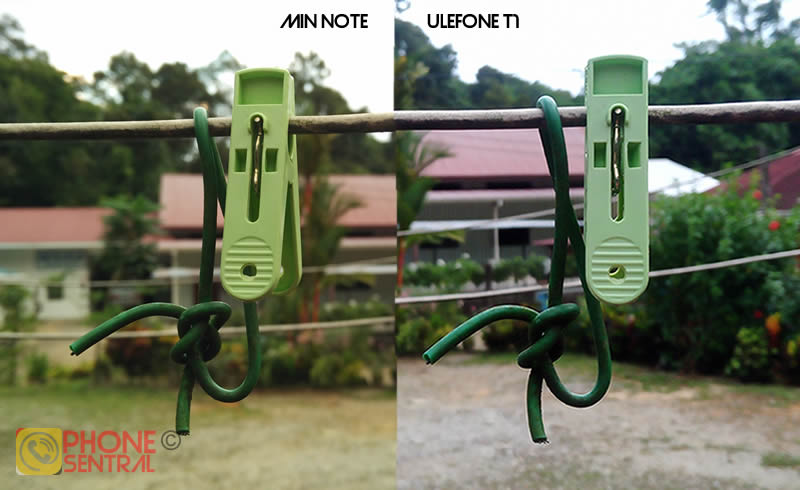 As you can see, the photo by the Xiaomi Mi Note is softer and nicer, where as the one produced by the Ulefone T1 is rather vivid, yet sharper.

The much talked about Bokeh Effect I must admit was a bit disappointed as I found focusing on an object using the setting was difficult. Most of the time, images I focused on came out not centered and that’s rather bothering.

Speaking of focusing, I somehow find focusing a bit difficult when taking a photos, despite the fact Ulefone claiming that the T1 has PDAF Fast Focus, a technology used in the Apple iPhone 6.

At night however, images turn out really nice if compared to phones like the Xiaomi Redmi Note 3.

When it comes to video, there’s really nothing much to say, but do check out the video quality of the Ulefone T1.

The 3680mAh battery used the Ulefone T1 could be stretched for over 13 hours on a single charge, on a daily normal use without switching off the phone’s GPS, WIFI and bluetooth. I have to admit that this is impressive.

I’ve used the Ulefone T1 for a week now since I got it, and I can say that it is almost the perfect smartphone with speed, storage space, a good camera and sizable battery.

The let down however does come in the Pure Android experience which somewhat isn’t as good and smooth as the MIUI which powers most Xiaomi smartphones.  Another issue is the frontal design of the Ulefone T1, which I do feel is somewhat a waste of space, coupled with the slight weight that the Ulefone T1 carries.

Anyway, with the Ulefone T1 sold at an unbelievable RM870 at the official Ulefone store on AliExpress (which is where I got mine), I find it very hard to tell you why you shouldn’t buy this smartphone, at least as a second phone, especially considering the specifications because, lets face it, a smartphone with those specs would cost you at least RM1,500 nowadays.